Those who originally started following this blog and the writing of my next novel, in real time, are probably thinking, "Well... Where is it?" Welcome to the world of a non-contracted novelist.

Even though it's been 365 days since my last post, my lack of updates does offer me a great segue into this post: Time flies over us, but leaves its shadow behind. (Nathaniel Hawthorne). It is within the shadow of time that we craft our greatest stories.

I disappeared after a life-long friend practically begged me to partner-up with him on a new venture. I initially said no, but later agreed. Nine months later, I have written thousands of pages comprising fourteen training courses--enough to fill three-to-four, 300-page novels. Although it's been more of a left brain writing project, it has kept my fingers buried in the keyboard for eight-to-ten hours a day. Do I miss my fiction writing? Yes! Will I ever return to The Local? Yes. Actually, the story continues to unfold as the shadow of time grows longer.

I mentioned in a previous post that my son and I will be writing The Local as a joint project. His value to the project is multifaceted. Not only is he an amazing editor, his youthfulness and view on life are invaluable assets to this project. In ways, The Local is a dramatic foretelling of the last ten years of his life.

I'll leave you with a "classical" picture of my son. It is his face within the body of a well-known dramatic figure: Mr. Darcy, from the 2005 version of Pride and Prejudice, starring Keira Knightley and Matthew Macfadyen.

Amazing the difference a new hairdo and costume can make. It is in the eye of the novelist that such creations are born (thanks to Photoshop). The trick is transposing the creations within the novelist's mind into a written form that the reader can enjoy. 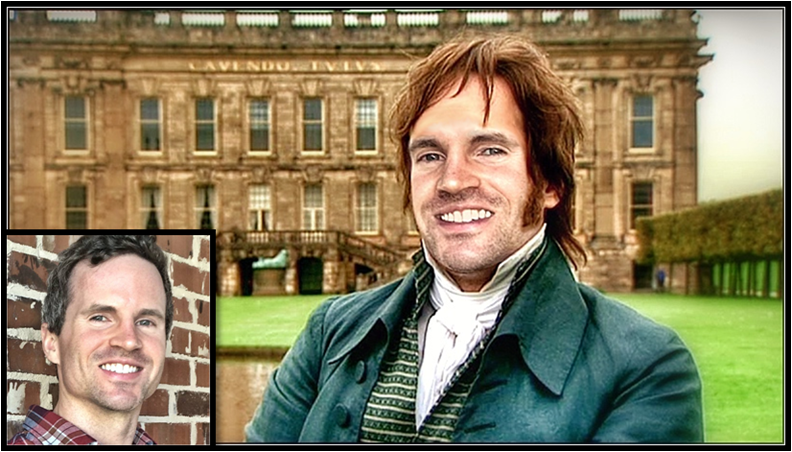 Please visit Mike's website to read reviews from passengers and more about his stories.